Earlier on Wednesday, (x)clusive had the opportunity to get the first peek of upcoming blockbuster movie “Dragon Blade“, starring Jackie Chan, Adrien Brody, John Cusack and featuring Super Junior’s Choi Siwon. The movie has been much talked about as a whopping US$65 million dollar production starring Hollywood A-listers, and amongst fans of Super Junior, it has been a hot topic since this is Siwon’s first time working together with world star and friend Jackie Chan, since the latter promised to film a movie together when they were on the variety show Running Man.

Disclaimer: This review is solely based on the opinions of the writers and do not represent the official stance of (x)clusive. We’ll try out best not to spoil the movie, so do check out the movie when it hits theatres on 19th February!

Set in 48BC during the Han Dynasty, Huo An (played by Jackie Chan), the Commander of the Protection Squad of the Western Regions, protects China’s border and secures peace among warring tribes on the Silk Road. He is accused of treason and sent to the border as a slave labourer. He sends his right hand man Yin Po (played by Choi Siwon) to investigate, and meanwhile, a small army of Roman soldiers led by General Lucius (played by John Cusack) threatens to take down the border gate. Huo An single-handedly turns the battle around and earns the respect of Lucius. Among the Romans is a blind boy called Publius, the youngest son of Rome’s Consul Crassus. Crassus was assassinated by his ambitious eldest son, Tiberius (played by Adrien Brody), who is leading 100,000 soldiers towards the border gate, employing subterfuge to kidnap Lucius. This leads to a thrilling piece of history that has never before been told.

L: Let’s start off with the cast of the movie. I guess the reason why we’re reviewing this is because of Siwon.
M: He appears for like, no more than 5 minutes in the movie…? He just appears and pulls his sword and then later… *SPOILER*

L: Yeah, I wish that part of the story was better explained though. He should have appeared more. If anyone is anticipating just to watch Siwon, I think they will be quite disappointed…
M: Yeah, but his role is still really important though. Because of what he did, the story unfolded..

L: True. It was cool when he spoke in English though (mimicks) “Hand me the *SPOILER* and I will hand you the *SPOILER*” The Chinese voice over part was pretty obvious though~

M: I think he still needs to work on his pronunciation, but it did looked like he was actually mouthing the Chinese characters.

M: That moment when he started singing… That was so good! I teared up a little.
L: But it was so sad that he had to… *SPOILER*

L: I have to say, I don’t cry easily when I watch movies, and I teared up a bit watching this.
M: I actually cried. Especially the part when the young hero stabbed the General, or the ending where he had to *SPOILER*
L: This movie really gets to your emotions a lot. A lot of scenes about warfare, patriotism and humanity…

M: The movie editing is a bit choppy though.
L: Yeah, I guess you can say either there are a lot of plot twists or the plot’s pretty complicated. Or they had to cut short the movie so they had to rush things?

M: There’s somewhat of a main theme, but the scenes seemed to be disjointed at certain points so that somewhat disrupted the flow. The plot’s somewhat pretty predictable too. Like, there were foretelling signs of what was about to happen next, but that didn’t make the movie any less enjoyable.

L: It’s always at the crucial moment when someone appears to help haha~ But I was really wishing for someone to come save *SPOILER* though… It was too horrible T_T I had to cover my eyes ’cause I couldn’t bear to watch.

L: The cinematography was really good though! Especially the war scenes! (After searching online) Ah, it was filmed at the Gobi Desert because the Silk Road passes through it~ I loved that scene, it was really magnificent!

M: Yes, that was pretty good. The way they pan out to show the dessert and the whole city wall. The imagery of Rome was pretty cool too – with all the golden hue and stuff. Especially when they played the song to go along with it. ; u ; 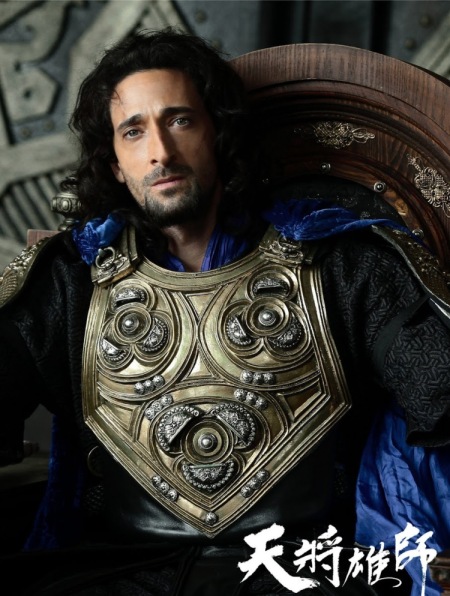 M: He’s The Pianist! You know, that really famous movie set in WWII era…? If you didn’t watch that, he was also in the movie King Kong as the male lead.

L: The introduction and ending part was pretty redundant though… They could have made it more related to the story.
M: Yeah, I was expecting that Vanness Wu was the descendant or the reincarnation of the General or something.

L: If there was some link it would have been better though. If not they could have just cut it off, it was a bit anticlimactic…
M: It felt unnecessary, but come to think of it, maybe they wanted to give the idea that the whole story existed? I don’t really know to be honest, it was a bit confusing.

L: It’s 4 out of 5 for me~ I really enjoyed it though, especially the emotions… The acting was awesome~ Didn’t look away for a moment during the movie.

M: Personally I thought it was pretty enjoyable, and I wouldn’t mind paying for a ticket. But I don’t think this is something I’d pay to watch more than once. I do like the action scenes and there were times where it invoked an emotional response for me so I do think it’s worth your dime and time.

Final Rating for Dragon Blade: 3.5 stars out of 5.

Let us know what your rating is after you watch the movie from 19th February onwards! Fans of Jackie Chan, John Cusack and Choi Siwon, be sure to catch them LIVE in person for their public appearance on 10th February, 7PM at nex’s Level 1 Atrium! More details can be found here.

Watch out for (x)clusive’s updates on the Gala Premiere of Dragon Blade, and meanwhile check out the official trailer of the movie!

GU9UDAN to Hold Live Show in Singapore This September

(x)clusive!: Bedazzled by more-than-wannabe Block B!